Our interim pastor is Don Dilley.  More about our Pastor—

I have been in every state except Alaska and every continent except Austrailia and Antarctica.  My professional path has been broad.  Roles I have performed in my adult life include pastor, college instructor, school bus driver, executive management coach/trainer, computer technician, technical trainer, entrepreneur, small business owner, and chaplain.  I returned to my pastoral calling as part of my transition at age sixty.  I served at Verona Presbyterian Church in Pittsburgh.  I retired from the full time ministry in 2009 and moved on to my boat full time.  I set sail for the Bahamas.  I served as Interim Pastor at Richmond Hill Church for three years.  I took some time off to sail from Savannah to Key West and back and married my special person, Debbie.  Debbie and I were business partners thirty years ago.  Debbie and I made our first home in Douglas, Georgia as I served Douglas Presbyterian Church for two years.

We both look forward to worshiping, praying, playing, and studying with you.  Let us begin our time together secure in God’s love and giving thanks for this time and this place in our lives. 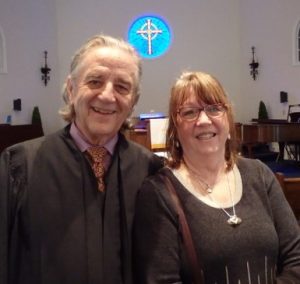 Our Music Director, Deborah A. McIlrath, attended Asbury University in Kentucky where she met her husband, Rev. Jim McIlrath.  Debbie and Jim married and moved to Georgia to work in the Perry FUMC.  She finished her education in Georgia schools earning a B.A. Music/Major – Piano, Minor – Voice and Religious Studies; Georgia Southern University. and later completed a Master’s degree in Music Education with a Choral emphasis at Valdosta State University.  Her past experiences include church staff positions in several of the South Georgia Conference United Methodist churches where her husband, Pastor Jim McIlrath has served: While in Perry FUMC, Debbie served as children’s director and organist; Reidsville FUMC, music director; Waynesboro FUMC, music/youth and children’s director; Cordele FUMC, organist; Columbus, St. Mark UMC, interim music director; and Americus FUMC, interim music director.  She in her twenty-sixth year of teaching in the Georgia Public School system and has taught music to every age-level, including college piano/adjunct at Georgia Southwestern University, Americus GA. Debbie has served as a children’s chorus clinician, an MCSD workshop leader in Orff training, and was Department Chair and a supervising teacher of student teachers at Shaw High School, MCSD, for Columbus State University.  Debbie has served as the mission’s committee secretary for the S.GA. Conference, and has accompanied or directed music and choirs at our Annual Conferences, District camps and retreats at Lake Junaluska and Epworth-By-the-Sea.  She is a member of P.A.G.E., G.M.E.A., and U.M.W. Debbie’s heart’s desire is to serve the Lord, her family and church families.  She is most grateful for God’s greatest gifts to her, which are her husband Jim, their three children and their spouses, Jimmy & Shannon, Megan & Josh, and Chuck who married Samantha, March 25, in Rome, GA. She and Jim have five grandchildren: Savannah, Abby, Lexi, Ethan and Isaac, and another boy on the way in November.  Her hobbies include running, swimming, knitting, and writing poetry.

Nancy Shuman is our pianist every Sunday.

Nancy grew up in Folkston, Georgia, a small town south of Brunswick.  She married her high school sweetheart, Bill Shuman, and they have been married 53 years.  They had four daughters, two live in Brunswick, one lives in St. Johns, Florida, and they lost one daughter in 2007.  They have 10 awesome grandchildren who they love and cherish.  Bill is a Georgia Tech civil engineer graduate and Nancy worked to “put him through college.”  Their first daughter was born two months after Bill graduated and Nancy became a “stay at home” Mom.  Nancy did return to the work first as a church preschool teacher and later director of the School of Discovery, First United Methodist Church in Jesup, Georgia for 12 years before moving to Brunswick in 1996.  Nancy has help direct and played for children and youth choirs as well as participated in adult church and community choirs.  She has enjoyed returning to her piano to play for Frederica church and appreciates the love and support she receives.

Judi Fergus is our Church Administrator and a Certified Spiritual Director. She has been at Fort Frederica Presbyterian since 2015. She is married to Fred and has two grown daughters, four cats, and one dog, Ewok, who sometimes can be found in the office with Judi. She is retired from the Federal government and has held several positions in the nonprofit sector. She is currently enrolled at Asbury Theological Seminary studying to be a Licensed Professional Counselor. Judi works most weeks Monday through Wednesday, 9AM-1PM. For Spiritual Direction appointments, please call her at 634-2240 or Spiritualfriend@comcast.net